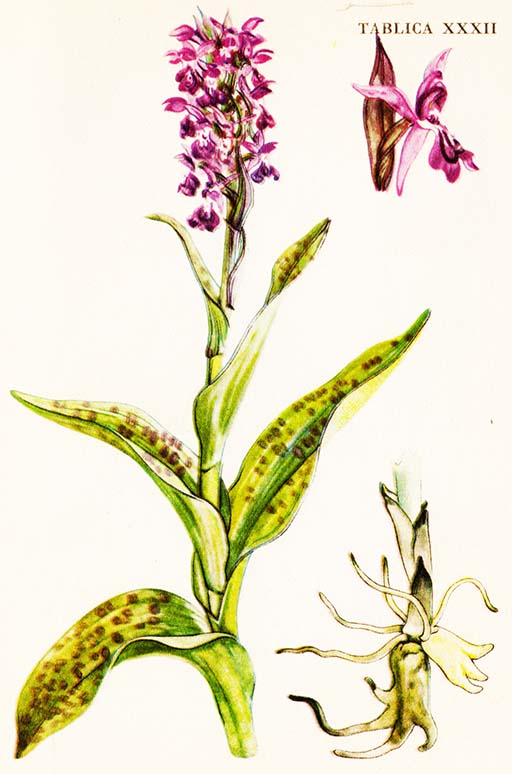 It is a small perennial, reaching 10-50 cm in height. It produces palmar, deeply indented, 3- or a 4-legged underground tuber, from which thick roots will grow. A new tuber grows every year, the old one dies; in summer they both perform side by side, the older one is always darker in color.

The stalk of broadleaf orchids is usually hollow inside. Its leaves, 3 to 6, are covered with sheaths: the lower ones are elliptical in shape, the higher ones are lanceolate. The leaf blade is dark green, very often with purple-brown spots on the upper surface.

Kłosowaty, the compact inflorescence consists of numerous odorless ones, red or pink colored flowers. Each of them is 2-laterally symmetrical with the bottom post. Perwiat consists of 6 plots, one of which is elongated and transformed into a patterned 3-lapel lip, from which grows a long spur. The lip and spur initially point upwards, later and, due to twisting the ovary by 180 °, face down. From the rest of the plots 2 the upper ones are tilted to the sides, and the rest 3 they huddle, creating a kind of helmet. White, the disc-shaped and sticky stigma of the pistil is located just above the spur opening. The only fertile stamen is fused with the neck, creating the so-called. columnar, also called the cervix. The anther is located just above the birthmark, and in each of its two chambers there is pollen stuck together in a kind of club called pollen mass. It is mounted on a handle, at the base of which there is a roundish one. sticky trailer.

The broad-leaved orchid blooms in May and June. Its flowers are pollinated by insects, mainly by bees and bumblebees. The insect, sitting on the flower, tries to reach the nectar, secreted by honey extracts located inside the spur, So he leans inside it, rubbing against pollen masses, that stick to his body (most often to the head) with sticky attachments and torn out of the anther chambers. Initially, they stick out quite stiffly, then their handles wilt, they themselves hang downwards, and when the insect lands on the next flower, dipping his head inside, touches them and dusts his mark.

The flowers wither shortly after pollination, the ovary unfolds and a fruit is formed - a bag with many, trifles (about 1/2 mm in length) our nation. They are very light and are sometimes dispersed by the wind. They have no endosperm, and their embryo is very underdeveloped. It is only during germination that an object called a protocorm is formed, in which shoots and roots are formed. There are always fungal hyphae in the cells of the protocols, which accompany the plant in the later stages of development. As stated, the presence of mycelium in the orchid's tissues is necessary for the normal course of physiological processes. This phenomenon of the coexistence of the fungus with higher plants is quite common and is called mycorrhiza.